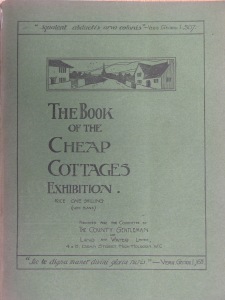 It’s always nice to find something of local interest among the books and pamphlets of the Tower Project, and so I was fascinated when I came across a book entitled The book of the Cheap Cottages Exhibition which featured a map of a model housing estate at Letchworth.

Interested in how, and indeed why, anyone could organise an exhibition of cottages, I investigated further, and found that, at the beginning of the 20th century, there was a dearth of cottages for agricultural laborours in rural districts. The solution must be simple, I thought, just build more!

However, it turned out that the building of new cottages had been made much more expensive by stringent building bye-laws designed to improve the safety and health of the cottage dweller. The expense of the construction of new cottages made land owners reluctant to build new housing for agricultural laborours because the rents the labourers could afford to pay did not make it financially viable for them to do so. Meanwhile, old cottages were becoming more dilapidated and the lack of affordable housing was driving agricultural workers into the towns, thereby depriving the countryside of a much needed workforce.

Therefore, in 1905, a competition was launched to find the perfect £150 cottage, for which a labourer could pay an affordable annual rent of approximately £8. A large number of architects and builders took part. Letchworth Estate, which had already been selected as a site for one of the new Garden Cities in the previous year, was chosen as the perfect place for the designs to be trialed. Most importantly for the buidlers and architects, the Garden Cities were protected from many of the building bye-laws, so that they had a much freer hand in design and use of materials. 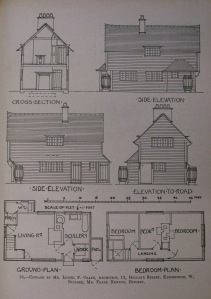 The Exhibition was a great success: 60,000-80,000 people visited it, and it resulted in a temporary station being contructed at Letchworth on the London-Cambridge line. The exhibition was so popular that another was organised two years later.

Whether the aim of the Exhibition was in fact reached is another matter: it is uncertain if labourers ever lived in the cottages. One of the criticisms uttered by the judges was that many of the cottages seemed to be more suitable to the needs of middle-class families who wanted a weekend cottage than those of the labourers for whom they had supposedly been designed. However, the exhibition certainly showed new building techniques and materials to the masses and proved that the building bye-laws were often more of a hindrance than a help to those attempting to construct housing for an ever-expanding population.

While the identities of the inhabitants of the cottages may remain uncertain, the fate of the cottages themselves is clear: 124 of the 131 cottages built for the 1905 Exhibtion are still standing today.

For more information on the Cheap Cottages Exhibition of 1905 and recent pictures of the surviving cottages see these websites: