A crisis hit the project this week when we came to plan our blog post. We’d catalogued energetically  all week  but nothing inspired us to admiration or witty comment, nothing tempted us to smile. To be honest, we couldn’t escape the feeling that we’d seen it all before. Yet more heroic tales of British boys travelling around the world making a nuisance of themselves, fairy stories that were frankly tedious, romantic novels that failed to grip. Was 1910 really so dull?

Luckily, just in time to avoid having to fake enthusiasm for something, I discovered Printers’ Pie: “a festival souvenir of the Printers’ Pension, Almshouse and Orphan Asylum Corporation” which instantly lifted my spirits. It’s a sort of annual published for Christmas, a collection of light short stories and colourful cartoons, including one by W. Heath Robinson. The adverts were particularly entertaining, covering everything from a replica for the Great Sphinx of Cairo (14 inches high, can be cleaned with soap and water) to “dainty motor millinery”.

I also found several remedies for people in 1910 who were feeling “out of sorts”. Some of these sounded drastic: for example, Lactobacilline (soured) milk, which even the advertiser said had “a certain peculiar flavour that is impossible to describe”. My favourite was this startlingly colourful advert for Vibrona tonic wine. Perhaps the project should order a case? 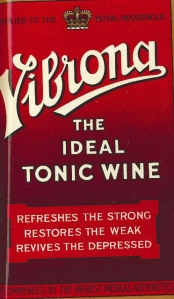 2 thoughts on “A certain cure for boredom”