I have to confess that I hadn’t given much thought to holidays during the First World War until I came across this volume The holidays – where to stay and what to see, 1917 – an annual publication,  first published in 1896. 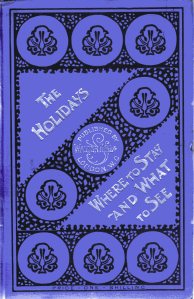 The 1917 edition is about half the size  of the peacetime volumes, but is still pretty substantial. There are well over 300 pages of text and advertisements, and there are hardly any references to the war.  Perhaps at the time it wasn’t necessary to continually mention the fact,  but anyone reading the guide today would find it hard to believe that at the time of publication Britain had been at war for more than two years.

As you might expect, with so many European destinations unavailable, the guide mainly features British seaside resorts and spa towns.  Blackpool, Brighton, Scarborough and Great Yarmouth all feature prominently – with no mention of risk of air raids, or the bombardment of East Coast towns by the German fleet.  Not surprisingly, inland destinations proved popular, though there are some unusual entries –  I hadn’t really considered Luton, Dunstable, Hitchin and Peterborough as prime holiday destinations!

It’s always interesting to find references to places that you know well, so I was pleased to find this advertisement for Thorpeness, a purpose built holiday “village” near Aldeburgh in Suffolk.  I stayed there several times in the 1990s, and the place has hardly changed. In fact there was far more to do there in 1917 than there is today.

Most surprisngly holiday cruises were still being advertised.  The Rotterdam Lloyd company were offering 18 day Mediterranean cruises, departing from Southampton, and calling at Lisbon, Tangier, Gibraltar and Marseille. Fares averaged about £1 per day in 1st Class, and 12s (60p) in 2nd class.  The Finland Line was also offering holidays in Finland, sailing from Hull.  I’m not an expert on the war at sea, but the Mediterranean and the North Sea must have been pretty hazardous in 1917 – certainly not suitable for a pleasure cruise.