we catalogue, but often neglect the bindings. Book bindings are very important, as anyone who has spent their weekends browsing in bookshops will know, since they are what draws many people to the book in the first place.

Several of the books that are currently being catalogued reflect the Art Deco movement of the early twentieth century. Talwin Morris was one designer who made his name with this sort of work.

Born in 1865, Morris started his professional life in the office of architectural firm Martin Brooks. It was here that he developed the interest in architectural drawing which was to heavily influence his work. In 1891 he became the sub-editor and designer for a weekly publication called “Black and White”.  His main duties included designing initial letters and decorative panels for the magazine.

In 1893 he took a job that was to define his career. As well as working as a freelance designer, Morris took the position of Arts Director for the publishing firm Blackie and Sons in Glasgow. The firm wanted designs which could be used on each different publication but still tie them together with a unifying theme – a sort of ‘house style’. Morris used his knowledge of architectural drawing and the Art Nouveau movement to design images and covers which set Blackie and Sons books apart from the rest.

At the time this was a new way of doing things, since previously publishers had been more focused on what was inside the book. Bookbinding technology had advanced to such a degree that bindings could become evermore colourful and elaborate and Morris took full advantage of this. Some of the designs, illustrated throughout this post, are truly beautiful. He also designed end papers and motifs for many of the books that he worked on. 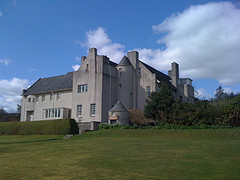 Another of Morris’ claims to fame is that he introduced his friend Charles Rennie Mackintosh to publisher Walter Blackie. Blackie was looking for a designer for his new home and Morris recommended Mackintosh. The end result was Hill House in Helensburgh, Scotland. This is still open as a heritage site today and is regarded as Mackintosh’s ‘finest domestic creation’.

One lucky architecture student appreciated the beauty of Morris’ work when he found a copper plate and two plaques in a skip in Glasgow. After rescuing them he held on to them and recently sold them for £6,000. This proves that the Art Nouveau period is still in favour with many collectors today and hopefully will continue to be for some time yet!